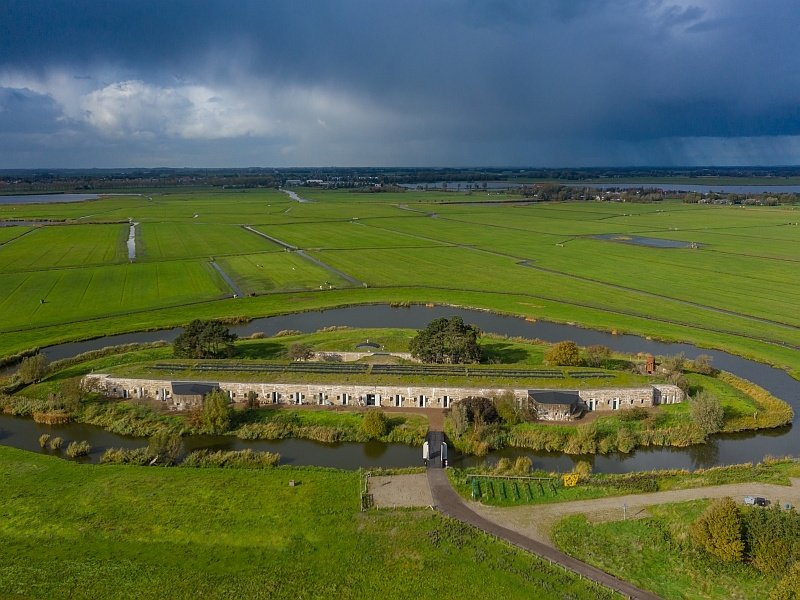 The Defence Line of Amsterdam (or the Stelling van Amsterdam, as it’s known in Dutch), is a large ring of forts, defences and water control systems around the city of Amsterdam. Added to the UNESCO World Heritage List in 1996, the Defence Line is a fascinating example of Dutch engineering and ingenious water management, and it’s one of the more unusual UNESCO World Heritage Sites in the Netherlands. But what exactly is it? What is its history? And why is it on the World Heritage List? Read on, for the answers to all this and more!

What is the Defence Line of Amsterdam?

In total, the Amsterdam Defence Line has 42 forts, located between 10 and 15 kilometres from central Amsterdam. The forts are arranged in a large C shape, and stretch for 135 kilometres in a ring from Volendam to the north-east, as far west as Haarlem, and around to Muiden in the south-east. Closing off the ring are forts in the IJmeer, protecting against attack from the sea.

The idea behind the Defence Line of Amsterdam was quite simple. Much of the area around the city was located at or below sea level, and so opening all of the dams, sluices and other water control mechanisms would cause a colossal flood around the city. Although the floodwaters would only be one or two feet deep, it was shallow enough to prevent warships from entering, but still deep enough to make infantry assaults very difficult. To reinforce the defences, forts were constructed at regular intervals, at key strategic positions, and on the handful of higher ground locations. Here, soldiers would be stationed to fight off incoming forces. Surrounded by forts and water, Amsterdam could then serve as the “land stand of the Netherlands” – safe, secure, and impossible for enemies to take.

History of the Amsterdam Defence Line

The concept behind Amsterdam’s defences dates back to the 1870s. German unification suddenly meant that the Netherlands was surrounded by three great powers – Germany to the east, France to the south, and the United Kingdom in the north-west. Feeling nervous, the Dutch government began to plan their defences, based around their greatest technical achievement: mastery of water engineering. Early tests revealed a crucial design flaw: the new modern high-explosive shells (as opposed to simple cannon balls) obliterated the brick fortress designs.

After several re-designs and an excruciatingly slow testing process, the designers switched to using reinforced concrete that could better withstand high explosives, and construction finally began in 1897. The project wound on for another twenty years, and was finally completed in 1920.

Sadly, it was a complete failure, as the development of aircraft and tanks rendered the whole water defence system completely and utterly obsolete. Despite the enormous cost, none of the forts ever saw active combat or fired a shot in anger. The Dutch military continued to maintain the forts and use the facilities until the 1960s, when the last fort was decommissioned. These days many of the forts are museums and open to the public.

One of the most impressive fortresses is Pampus, located on an artificial island in the IJmeer just near Amsterdam. As a sea fort, Pampus was designed to protect Amsterdam’s harbours and sea entrances from attack, and was an important linchpin of the defence line. Pampus opened in 1895, and was heavily armed with large caliber guns, smaller machine guns, and a staff of 200 soldiers. After World War I, anti-aircraft guns were added to reinforce the fort, but in 1932 the new Afsluitdijk completely cut off the IJmeer from the North Sea, rendering Pampus completely useless. It was abandoned shortly after and gradually plundered for scrap metal and firewood over the following decades. After restoration, Pampus was reopened to the public in 2007 as a museum attraction.

Another fascinating fort to visit is the Fort near Abcoude, located south-east of Amsterdam. It’s the oldest of the land-based forts in the Amsterdam Defence Line, and the early building style is quite apparent. Constructed between 1884 and 1887, the fort here is built from a mixture of bricks and reinforced concrete. Not far away is Fort Ossenmarkt in the town of Weesp, located on an island in the Vecht river. It was built in the 1860s, but later reinforced and brought into the Defence Line.

On the opposite side of Amsterdam, to the far north, are the interesting forts near Edam and near Nekkerweg. The Fort near Edam opened in 1912, and was one of the last forts still in active use, storing ammunition right through until 1986. It’s located right near the main sea dike, and has several impressive casemates (protected firing positions). Nearby at Nekkerweg, the main fort opened in 1913 and was used as a military prison for conscientious objectors. These days it’s been carefully restored, and surprisingly – operates as a hotel!

How to visit the forts?

The Defence Line of Amsterdam is ideal for a road trip – you can get from one fort to the other, travelling around Amsterdam. However, not all forts are open for visitors, but you can still see them.

Another option is to take one of the day tours from Amsterdam that cover the forts in de Beemster Polder, which is another World Heritage site, and Fort Pampus. Here’s a selection of these tours:

If you want to visit the forts on your own, here’s a list of the forts that can be visited. Some of them are museums, others function as restaurants and there’s even a hotel among them. There are three visitor’s centres (museums) where you can learn about the Defence Line of Amsterdam: Fort K’ijk, Fort Pampus and Muizenfort (Fort C, Vesting Muiden), which are also the most popular forts and the most visited ones by the tourists.

For more information about the forts, you can check the official website of the Stelling van Amsterdam.

Overall, the Defences of Amsterdam are one of the most interesting and unusual UNESCO World Heritage Sites in the Netherlands. There’s nothing quite like it anywhere in the world, and certainly nothing more uniquely Dutch than basing a national defence strategy around water management. Each of the forts is fascinating in their own way, and well worth a visit, particularly if you’re interested in learning about the World Heritage Sites in Amsterdam.