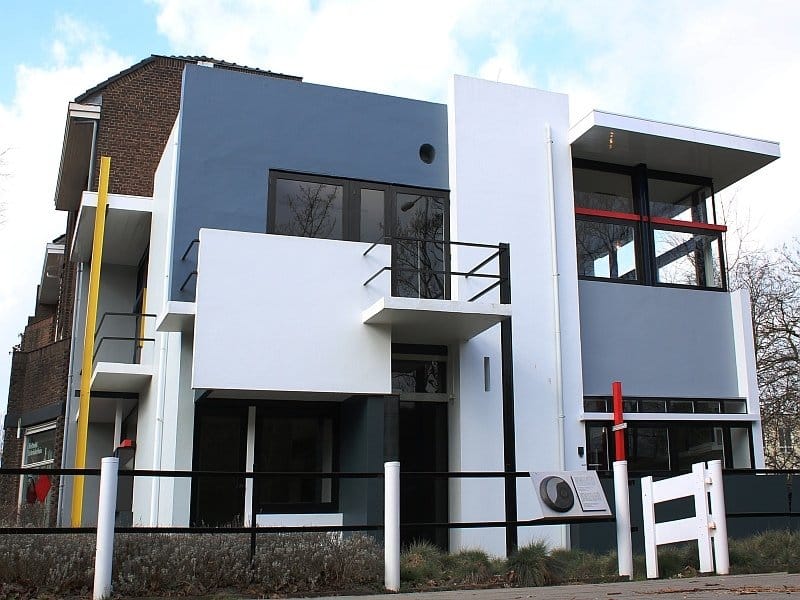 Houses in the Netherlands are always fascinating. It’s common to find houses from the Dutch Golden Age (and sometimes even earlier!) occupying the old and historic cities, before these storied areas give way to endless rows of 20th century terrace houses, and finally petering out into the fields. But hidden among these terraces are some incredible and unique houses. The most beautiful and interesting of these houses is the Rietveld-Schröder House, located in Utrecht. It’s one of the most unusual and important houses of the 20th century. But what is it like? What’s the story behind it? And why is it on the UNESCO World Heritage List? Read on, to find out!

What is the Rietveld-Schröder House?

The Rietveld-Schröder House is located in a quiet suburban side street of eastern Utrecht, about an hour south of Amsterdam. It was built between 1922 and 1924, and was designed by Dutch architect and designer Gerrit Rietveld. It was commissioned by Ms Truus Schröder-Schräder, a wealthy local socialite and pharmacist, and who also provided substantial input into the house. Recently widowed, Ms Schröder wanted a house with no interior walls, where she and her three children could live free of constraints. To achieve her vision, Rietveld and Schröder turned to the principles of De Stijl, an influential Dutch design movement.

What is De Stijl?

De Stijl (literally: The Style) is an early 20th century art movement, founded in Leiden around 1917. As with many contemporary art movements, De Stijl aimed to reduce art down to the absolute essentials of shape and colour. Designs were simplified to only include horizontal and vertical lines, along with square and rectangular shapes. Palettes were limited to black, white, and basic primary colours.

Gerrit Rietveld was a founding member of the De Stijl movement, and was particularly known for his famous Red and Blue Chair, which also explored the idea of creating form with negative space. Although it was becoming increasingly popular, De Stijl was still on the cutting edge of design, and architects were yet to embrace its ideas. But in the early 1920s, the visionary Ms Schröder realised that De Stijl’s concepts of negative space and interior freedom matched perfectly with her desire for open living, and the Rietveld-Schröder House concept was born.

Implementing the ideas of De Stijl, Rietveld and Schröder created a compact, two storey house. The lower floor is semi-traditional, with three bedrooms and a kitchen arranged around a central staircase. Oddly, there’s also a garage! It’s a mystifying inclusion, as Ms Schröder (like most of 1920s Utrecht) didn’t own a car. In keeping with De Stijl principles, everything has a specific primary colour such as black window frames, blue doors, and so on. But it’s upstairs that De Stijl principles really shine through.

The upper floor of the Rietveld-Schröder House is designed as a completely open space. Aside from a separate bathroom and toilet, there are no indoor walls at all upstairs. It creates an oversized living area, where the occupants can enjoy the large amounts of free space, enjoy the exterior views from anywhere in the house, and not feel cramped by a series of small rooms.

However, the genius of Rietveld and Schröder is on full display, as there’s a series of wood and cork panels concealed around the edges of the room. Following tracks along the floor and ceiling, the residents can create or partition as much space as desired, simply by sliding a few panels around. A huge number of possible combinations can be created by moving these panels around, from the totally open large room, to three separate bedrooms and a small living area. It’s a brilliant system, and one that had never been attempted before.

The windows are also quite unusual: large, and plentiful. There are more windows than usual for a 1920s house, flooding the interior with light and bringing the outside indoors. This effect is of course magnified by removing as many internal walls as possible. Of particular note is the “invisible” corner window upstairs, where an entire corner of the house is covered in windows. Rather than sliding or lifting, these windows open outwards with a hinge, much like a door. Opening both windows essentially removes the corner of the house, feeling more like a balcony than a window.

History of the Rietveld-Schröder House

Construction of the Rietveld-Schröder House finished in 1924, and Ms Schröder moved in with her children almost immediately. At the time, the house was literally on the edge of the city: the view out many of the windows looked directly onto the green polder fields. But development encroached. More land nearby was released for development, and although a nearby block was purchased to preserve the views (eventually holding the Erasmuslaan, another Rietveld-Schröder collaboration), more surrounding houses were built as the city continued to spread. Eventually a four-lane motorway was built directly opposite the house, ruining the green outlook forever.

Meanwhile, Gerrit Rietveld had become Ms Schröder’s lover and moved into the house, working from a studio on the ground floor until his death in 1964. Mrs Schröder continued to live in the house until her death in 1985, when it became a museum, and was eventually added to the UNESCO World Heritage List in 2000.

Legacy of the Rietveld-Schröder House

These days, the House is considered to be the only true example of De Stijl architecture, though other attempts were made at the time. Its unusual concepts and ideas had a tremendous impact on contemporary architects, and inspired many to break free from traditional notions of what a house could and couldn’t be. It’s also an early example of “open-plan” living, an idea built into many modern houses without a second thought, but a revolutionary concept at the time. Without the ideas of Gerrit Rietveld and Truus Schröder, it’s fair to say that our modern houses might well look very different, and that alone makes it a worthy addition to the UNESCO World Heritage List.

How to visit the House

When you arrive in Utrecht you have a few options:

The opening hours of the House are Tuesday-Sunday from 10 am to 3 pm.

You can visit it only with a guided tour. Tickets cost 18 EUR for adults and 9,50 EUR for kids (13-17 years). You can book the tickets via the website of the house-museum.