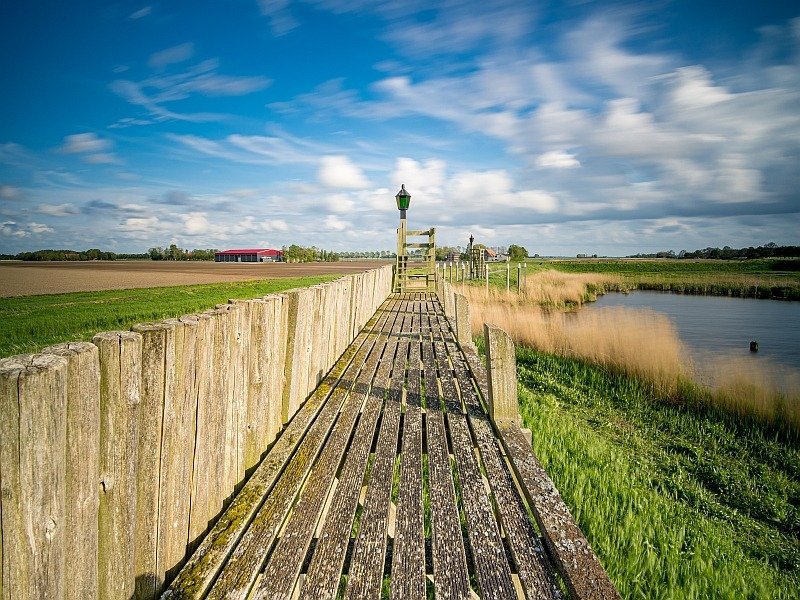 It’s almost a given that countries with a long and storied history will have their share of ups and downs. As the years and centuries roll past, civilizations rise and fall like tides, ebbing and flowing with the social, political, and economic challenges of the times. But nowhere is this quite as literal as in the Netherlands, where the glorious history of the Dutch can be paired almost literally with the rise and fall of the actual tides.

The Schokland and Surroundings UNESCO World Heritage Site is a fantastic example of this trend, where the history of the area depends on the level of (and control over!) the nearby water. But what is Schokland? Why is it a World Heritage Site? And why is it important? Read on for the answers to this, and much more!

What is Schokland and Surroundings?

The Schokland and Surroundings UNESCO site is a unique patch of land in Flevoland, about an hour’s drive north-east of Amsterdam. It’s not a particularly large area – only a few square kilometres, but it has a fascinating history. Schokland has been inhabited more or less continually since prehistoric times, and the land itself has been variously a marshland, a peninsula, an island, a sea bed, and eventually: a low hill among farmlands. There’s four tiny hamlets within Schokland: Zuidpunt, Zuidert, Middelbuurt, and old-Emmeloord (not to be confused with today’s Emmeloord), though nobody actually lives here anymore. The history itself is quite fascinating, and definitely deserves a closer look.

It’s not known when exactly the area was settled. Archaeological digs have uncovered 4,000 year old objects (including human footprints!), though others suspect the first Schoklanders arrived here around 12,000 years ago. The area was largely marshland and peat bogs, and the locals made a living by farming the peat for use as fuel and fertiliser. By the Middle Ages, much of the peat was gone and the area was used agriculturally for farming crops and livestock. It was during this period that Schokland’s villages were founded, sitting on small, man-made hills known as terpen – the best defence against high tides and storm surges.

By the late Middle Ages, around 1450, rising waters from the Zuider Zee began to flood and wash away the crop fields around the town. As the waters encroached, Schokland became a peninsula, with the water defences around the terpen forming the new shoreline. Rising tides and occasional floods kept reclaiming farmland, and by the 18th century most of the farmland was underwater. Schokland had become an island, while the local farmers had turned to fishing to support their families.

In 1859, Schokland’s battle against the water was finally lost – seemingly for good. Due to both poverty and rising water, the last remaining inhabitants were ordered to leave, and the long history of Schokland came to an end. But not for long! In 1942, less than a century later, drainage work on the polder surrounding Schokland (the Noordoostpolder), was completed. Re-emerging from the water, Schokland was no longer an island, or even a peninsula! It was now an elevated area surrounded by fields, which it continues to be to this day.

Tip: If you are visiting the Netherlands in the spring, the Noordoostpolder is the place where the largest and most beautiful tulips farms are. There’s also a Tulip Festival organized annually in April-May, where you can drive along the farms and enjoy the fields.

Why is Schokland a UNESCO World Heritage Site?

The struggle against (and effective management of) water has genuinely defined Dutch history and culture for centuries. Schokland is an emblematic example of this struggle, and it’s hardly surprising that Schokland was actually the Netherlands’ first UNESCO World Heritage Site.

Schokland also continues to be a great place for learning about prehistoric Europeans. There’s over 160 archaeological sites in the area, with some finds dating back thousands of years. All kinds of stuff has been discovered at Schokland, from footprints, to tools and pottery, to graves and prehistoric mounds. And many of the buildings from the last inhabited era of Schokland are still present, including what was once the sea wall, houses, an impressive church, and the lighthouse too.

How to get to Schokland

The best way to visit Schokland from Amsterdam is by an organized tour or by car.

Here’s a selection of day tours from Amsterdam, that beside Schokland, include 4 other UNESCO World Heritage Sites which are difficult to reach from Amsterdam:

If you travel by car from Amsterdam, it takes about an hour to Schokland (90 km).

Unfortunately, you can’t visit Schokland by public transport. The nearest town to travel to is Ens and then you will need to walk about an our to the former island. There’s also Regiotaxi transportation available in Flevoland, but their site is only in Dutch. Regiotaxi is not expensive, as you might expect from the ‘taxi’ in the name. It’s actually a kind of on-call local transportation.

Another option will be to rent a bike in Amsterdam and take the train from Amsterdam Centraal to Kampen (with a change in Zwolle). From Kampen to Schokland it’s 18 km, about an hour by bike. You can take your bike on trains in the Netherlands, but not in the bus, that’s why you need to get off at Kampen.

Things to do on Schokland

On Schokland you can visit the Schokland Museum (Museum Schokland) housed in the former church. Next to the church, there’s also a restaurant, which is open at the same as the museum.

Another place to visit is the Rock Garden (Gesteentetuin) on the northern tip of the former island. These are boulders which have been left behind by the gletsjers some 200 000 years ago. There’s a local tourist office there, where you can learn everything about this geological formation.

Other things to see on Schokland are the old harbour with the harbour lights, the lighthouse, the lightkeeper’s house and the foghorn house.

Schokland is not a big area and you can walk pretty much everywhere. This is also how you can best experience the place. All important landmarks on Schokland are provided with information boards.

Overall, Schokland is a fascinating spot. You can see quite clearly the close relationship between the Dutch and the water, and it serves as a constant reminder of how depending on the sea has such huge advantages and disadvantages. It’s a really interesting place to visit, and ultimately the Schokland UNESCO site is a well-justified addition to the World Heritage List.