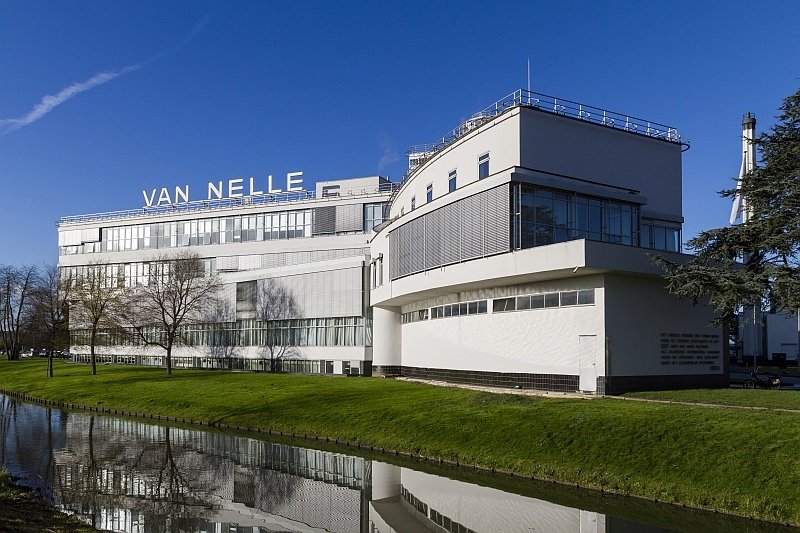 Factories aren’t normally the sort of buildings one associates with the UNESCO World Heritage List. They’re typically ugly and utilitarian structures, consigned to a city’s outskirts and ignored by most. But factories have played a very important role in human history. From the first small-scale factories of the early modern world, through to the cavernous assembly buildings that manufacture modern goods, the factory is both important and under-rated.

The UNESCO World Heritage List is home to several interesting and important factory complexes, like the UK’s Derwent Valley Mills which kickstarted the Industrial Revolution, and the mighty engines of the Ruhr Valley, which took Germany to the brink of European domination. Which brings us to the Van Nelle Factory, a surprisingly beautiful factory located near the centre of Rotterdam. Added to the World Heritage List in 2014, the Van Nelle Factory is as interesting as it is unusual. So what’s the history behind it? Why is it so important? And why is it a UNESCO World Heritage Site? The answers, and more, lie below!

About the Van Nelle Factory

The Van Nelle Factory was built between 1925 and 1931, and sits beside the Spaanse Polder‘s Schie Canal, slightly north-west of central Rotterdam. Known in Dutch as the Van Nellefabriek, it was designed by architect Leendert van der Vlugt in the International Style, which was becoming popular during the 1920s. The factory was purpose-built as the new headquarters and main processing centre for the Van Nelle Company, whose main business was importing coffee, tea, and tobacco, and turning them into consumer products.

There’s three main buildings on site, one each for processing tobacco, tea, and coffee, along with a separate campus of warehouses, sheds, a boilerhouse, chimney, and a small curving office block as well. The main building, for producing tobacco, is quite large – eight storeys high, and over 300 metres long. All three processing buildings were designed to operate from the top down, so that raw materials were initially deposited on the highest floor, and each step of processing would take the goods to the floor underneath. The upper floors of the main buildings are also linked by covered glass ramps, allowing workers to move easily between buildings regardless of the weather, and without wasting valuable time walking up and down stairs.

The factory is also ideally situated. Rotterdam is the Netherlands’ main port (and still among Europe’s busiest ports!), and the factory is ideally situated near a canal, adjacent to a highway, and right on a railway line. This all means that goods could be shipped in and out as efficiently as possible.

History of the Factory

The Van Nelle Company was founded in 1782 by Johannes and Hendrica van Nelle. It was originally a small shop in Rotterdam that sold tobacco, coffee, and tea. Business was good, and during the 19th century the company expanded, controlling several plantations in the Dutch East Indies (modern day Indonesia) and refining the produce in-house at its factory in Rotterdam. In the 1920s, as the post-war economy boomed, a new facility was needed to process even more goods, and the Van Nelle Factory was born.

The new factory opened in 1931, a shining beacon of glass, concrete, and steel. It was entirely unlike contemporary brick factories with small windows and cramped conditions. Famed architect Le Corbusier (whose buildings also feature several times on the World Heritage List) called it “the most beautiful spectacle of the modern age”, while three of the Van Nelle Company’s directors immediately commissioned van der Vlugt to build them private houses. One of these, the Sonneveld House, is a major Rotterdam tourist attraction.

After the second World War, the factory expanded into processing other products like rice, cigarettes, chewing gum, and instant pudding. In 1989, the Van Nelle company was purchased by its competitor, Douwe Egberts, and the Factory closed in 1996. A restoration project began almost immediately, and within a few years the factory became home to various design and architecture companies. These days, there’s an even more diverse group of occupants in the factory, including media and advertising companies, a co-working space, meeting rooms, and a large event space as well.

Architecture of the Factory

The Van Nelle Factory is one of the world’s most striking factories. It’s designed in the International Style, which prioritises the use of flat surfaces, repetitive modules, and heavy use of mass-produced industrial materials, while minimising ornamentation and colour. All of these aspects are on full display at the Factory, particularly on the immense facade. But one of the most innovative features of the Factory building is the pioneering use of a “curtain wall“. Using this now-common technique, the building’s weight is supported by large internal concrete pillars rather than the external walls, allowing these external walls to be decorative, and to use light-weight materials. Like a modern skyscraper, the external walls of the factory were made entirely from glass and steel. This allows sunlight to flood the interior, improving both the conditions and morale of the workforce.

Perhaps mindful of labour disputes occurring in other countries, great care was taken at the Factory to keep workers happy and comfortable. Sporting facilities were built on-site to keep workers healthy, while a canteen provided meals and a garden provided relaxation. A cinema and library were both included, and a tea room on the roof provided fantastic views. Pot plants were scattered throughout the building, while the entrances and staircases were gender segregated. And most remarkably – hot showers were available on-site, which staff were expected to utilise. It was an almost unimaginable luxury, at a time when most Dutch homes still lacked running water. Overall, it was considered one of the best places to work in the Netherlands, and the Van Nelle Company’s 2,000 employees could be justifiably proud of their factory.

How to visit the Van Nelle Factory

You can visit the Van Nelle Factory with a guided tour via the Chabot Museum in Rotterdam. For more information, check out their website. The guided tours are on Friday, Saturday and Sunday from 2 pm to 3:30 pm. Tickets cost 19,50 EUR for adults and 15 EUR for kids and are inclusive transportation from the Chabot Museum to the factory and back.

If you decide to visit the factory by yourself, there’s no entrance fee as the factory is a public space. If you travel by car, the factory has its own parking space. By public transport, it takes less than 10 minutes from Rotterdam Central Station. Take RET bus line 38 to Schiedam and get off Beukelsbrug/Van Nellefabriek bus stop.

In many ways, the Van Nelle Factory represents a high-water mark for industrial workplace design. Aside from its pioneering use of the “curtain wall” technique, it’s very impressive to see the careful balance between the principles of architecture, the operational needs of the factory, and the well-being of the workforce. With such a superb mixture of glass, steel, and concrete, it’s fair to say that the Van Nelle Factory is one of the most impressive World Heritage Sites in the Netherlands, and truly a highlight of industrial UNESCO World Heritage Sites.