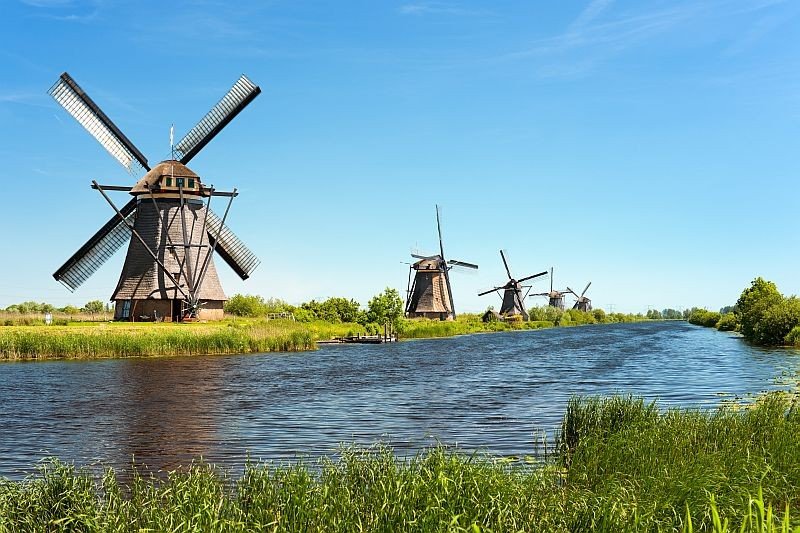 It’s a surprising fact that more than 25% of the Netherlands is located below sea level. For centuries, the Dutch have lived at or below sea level, building farms, houses, towns, and entire communities on land reclaimed from the water. So it’s hardly surprising that water management features are strongly among the Dutch UNESCO World Heritage Sites. Nowhere is this more obvious than at the windmills of Kinderdijk – one of the most iconic locations in the entire country. So what are the Windmills of Kinderdijk? Where are they? Why are they so important? The answers to all these, and more, lie below.

What are the Windmills at Kinderdijk?

This UNESCO World Heritage Site (officially known as the Mill Network of Kinderdijk/Elshout) is a collection of 19 large windmills, located around the village of Kinderdijk in South Holland province, just east of the city of Rotterdam. The windmills are located in the Alblasserwaard polder, where the Noord River meets the Lek River. The area has been farmed for centuries, but problems with drainage and flooding had occurred as far back as the 13th century. Initial management with canals proved successful, but by the 18th century a better solution was needed. The 19 windmills at Kinderdijk were constructed between 1738 and 1740 and gave the Alblasserwaard polder much more reliable flood protection.

Where are the Windmills of Kinderdijk?

The World Heritage windmills are built along a roughly two kilometre section of the Het Nieuwe Waterschap canal, connecting the Lek and Noord rivers. Eight of the windmills are located along the western and southern side of the canal (Nederwaard 1-8), while a further 8 windmills (Overwaard 1-8) are on the northern and eastern sides of the canal. The other three windmills (De Hoge Molen, Kleine of Lage Molen and De Blokker) are located in the polder nearby.

How does the mill system work?

The mills are mostly built of stone, either in a conical shape or tapering slightly towards the top. The sail blades are constructed with timber, as is the machinery inside, while the sails themselves were made of cloth. Although the windmills are the most famous aspect (and justifiably so!), they’re actually only part of the wider water management system around the polder.

Essentially, the windmills were used to pump water up from the low-lying polder into a slightly elevated basin or reservoir. Then, at low tide, locks would be opened and sluice gates lifted, and the excess water would drain from the reservoirs into the river, at which point the cycle could begin again. The full process is detailed in an excellent film at Hulpgemaal De Fabriek (the nearby modern pumping station), which is definitely one of the top things to do in Kinderdijk.

Fascinatingly, although the UNESCO windmills themselves have long ceased operating and been supplanted by modern water pumping stations, they’re still mainly in working condition. Some of the windmills are operated on special occasions, and it’s anticipated that the windmills could reactivate and help out during a general power outage. This happened occasionally during World War II, when fuel shortages meant there wasn’t enough fuel to run the diesel pumping stations.

The windmills of Kinderdijk were also family homes, in addition to being practical buildings. Three of the windmills at Kinderdijk have been designated as Museummolens (museum mills), where it’s possible to go inside and see how the mill families lived. The spaces are very cramped, despite the large exterior of each mill, and the loud operation of both the mill’s sails and machinery must have made life quite unpleasant for the millers and their families.

Why is Kinderdijk so important?

Although many societies across the world have been able to harness and manipulate water for their own purposes, no society has been more effective at it than the Dutch. The mills at Kinderdijk demonstrate just how ingenious their techniques were, and their fantastic state of preservation makes it easy to understand just how clever and innovative Dutch solutions were. This ingenuity is why Kinderdijk was added to the UNESCO World Heritage List in 1997. And although there are many other windmills in the world, there’s nowhere quite like Kinderdijk.

Where does the name Kinderdijk come from?

As a side note, you might be wondering about the name “Kinderdijk“. It literally translates from Dutch as “child dike”, and it’s widely believed that the name comes from a local folk tale. In this tale, a legendary flood forced locals to flee their homes in terror of the water. As they returned, a basket containing an orphaned baby was discovered in a nearby canal. A cat was also found inside the basket, moving around to keep things balanced and thus ensuring the child’s safety during the journey. The tale later became The Cat and the Cradle, and the story of the child floating in the dike gave the area its name, Kinderdijk.

On the map below you can see the exact location of all 19 windmills at Kinderdijk, as well as of the location of the parking place and the visitor centre.

How to visit the windmills at Kinderdijk?

Do you want to prepare better for your trip to Amsterdam? Read these posts:
➭ One day in Amsterdam – best things to do and see
➭ The best Amsterdam walking routes
➭ The best day trips from Amsterdam and how to get there

If you are staying in Amsterdam, the best way to visit the windmills will be with an organized tour. Here is a selection of tours to Kinderdijk that depart from Amsterdam:

If you are travelling by car, it takes about an hour and 20 min from Amsterdam to Kinderdijk. The distance is about 100 km.

If you are travelling by public transportation, you will need to get first to Rotterdam or Dordrecht.

Visiting Kinderdijk from Rotterdam or Dordrecht

The most fun way to get from Rotterdam or Dordrecht to Kinderdijk is to take the Waterbus (water bus). Water bus line 202 from Rotterdam to Dordrecht stops at Kinderdijk. The trip takes about 30 minutes. However, the line operates only in the summer, from May 1 to October 31. You can take the water bus in Rotterdam from the Erasmus Bridge (Erasmusbrug) stop. One-way ticket costs 4 EUR. Onboard you can pay only in cash.

An entry ticket to Kinderdijk costs 15,50 EUR. It includes a visit to the 3 museum mills, a boat trip along the windmills and an audio tour.

The parking at Kinderdijk is paid and costs 7,50 EUR. The address of Kinderdijk is Nederwaard 1b, 2961 AS Kinderdijk. There’s also a visitor center at the windmill park.

Drones are not allowed at Kinderdijk.

If you are travelling around in the Netherlands, Kinderdijk should be one of your stops. You can spend the night near the park. Here are some suggestions for hotels near Kinderdijk: 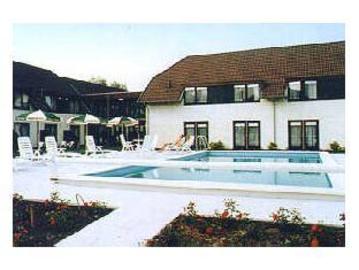 Kinderdijk is an exceptional World Heritage Site that celebrates the engineering genius of the Dutch. It’s an amazing example of 18th-century water management system. Besides, it’s a great place for learning how windmills function and how they were used to pump up the water.