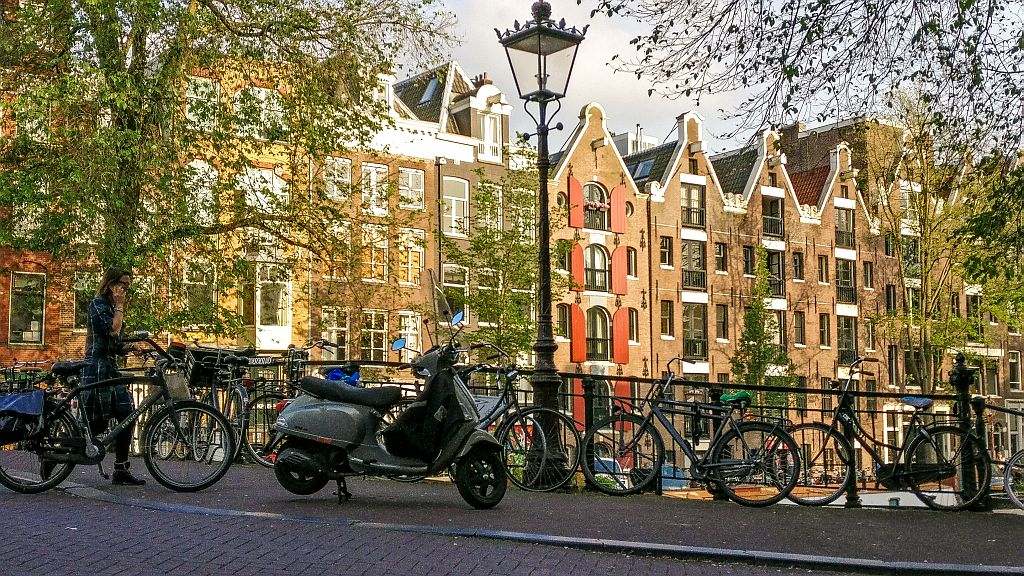 Discover Amsterdam with these 4 walking routes! These routes will help you see the best attractions of Amsterdam. All 4 routes start at the Central Station and will lead you to the Rijksmuseum. Depending on your starting or ending point (train station or a hotel) and the time you have, you can choose to walk either of these routes or to make a combination of them.

Read more:
1. How to spend the perfect day in Amsterdam.
2. The ultimate guide to the art museums in Amsterdam

Tip: Staying longer in Amsterdam and want to visit Keukenhof or Kinderdijk? Find out here which are the best day trips from Amsterdam. The post contains also tips on how to get there.

Tip: You can download the Google map and use it offline, if you don’t have internet on the go. All 4 Amsterdam itineraries are color-coded and you can turn them on/off in the map as they are made as different layers.

You can use these routes to get from one attraction in Amsterdam to the other or to just wander the streets and take countless photos of the beautiful Dutch capital. I haven’t indicated which streets to take, as I believe that discovering a city by yourself is better than following a map strictly.

Let me take you for a walk along the best spots in Amsterdam.

Amsterdam Central Station – if you are arriving at Amsterdam Central Station, make sure you turn around and have a look at the building. It is one of the most beautiful buildings in Amsterdam! Designed by the famous Dutch architect Pierre Cuypers, it opened in 1889. As the last years the building is undergoing continuous renovation and modernization, the area in front of it might seem a bit like a construction site.

Church of Saint Nicholas (Basiliek van de Heilige Nicolaas) – this beautiful basilica church is quite often overlooked by tourists. It was built in Neo-baroque style at the end of the 19th century and features a dome with amazing stained glass.

De Waag, or the Weigh House, is one of the most iconic buildings in Amsterdam. It was built in the 15th century and was part of the city walls, serving as a gate. Until the 18th century it was a weigh house and today there is a restaurant in the building.

Zuiderkerk, or the Southern Church, was built at the beginning of the 17th century and served as a church until 1929. It was restored in the 1970s. Its beautiful church tower dominates the whole area, serving as one of the most photographed landmarks in Amsterdam. Today the former church is used as a venue.

De Sluyswacht (the lock keeper’s house) is a super cute wooden house on St. Antoniesluis. It looks as if it’s gonna collapse any minute, so much tilted it is. But it still stands there since 1695 when it was built. Today, there’s a cafe in there.

Tip: If you stand in front of the Sluyswacht on the other side of the canal and look to your left, there’s a beautiful view of the Montelbaanstoren (Montelbaan Tower) and the futuristic NEMO Science Museum behind it.

Rembrandt House Museum – the famous Dutch painter Rembrandt (The Night Watch) has lived in this house between 1639 and 1656. Today, it’s a museum which I highly recommend visiting.

Waterlooplein Market – this is where the oldest flea market in the Netherlands is held from Monday to Saturday.

Blauwbrug, or Blue Bridge, is one of the most famous bridges in Amsterdam. It was built at the end of the 19th century. It resembles a bit the Alexander III Bridge in Paris but it lacks the grandeur of the latter.

Hermitage Amsterdam – before it became branch of the famous Hermitage in Saint Petersburg (Russia), it used to be a retirement home – Amstelhof. It was built in 1681 and functioned as such until 2007.

Magere brug, or the Skinny Bridge, is perhaps the most famous bridge in Amsterdam. The first drawbridge on this place was built in 1691 and the current version is from 1934.

De Koepelkerk, or the Round Church is a former Lutheran church, which was built in 1671. Today, it’s beautifully restored and serves as a venue for events and weddings.

Fun fact: In 1885 Van Gogh painted a view of Amsterdam with the Koepelkerk: De Singel with the Round Lutheran Church.

Beurs van Berlage is the old stock exchange of Amsterdam. This imposing building, located in the heart of the city, opened its doors in 1903. The beautiful clock tower was inspired by the 13th-century tower in Brescia (Italy) – Torre del Popolo. The stock exchange can be visited.

De Oude Kerk, or the Old Church, is a must-see as it is the oldest, still existing building of Amsterdam! It dates back to the beginning of the 14th century. The church serves also as an exhibition venue.

De Nieuwe Kerk, or the New Church, is located in the heart of Amsterdam – on the Dam Square. Built in the beginning of the 15th century, today the Church serves as a venue for exhibitions.

The Royal Palace – this is the official residence of the Dutch King. It’s a beautiful building with imposing interior. The building also serves as an exhibition hall. The Royal Palace on the Dam is open for visitors.

Dam Square is the heart of Amsterdam and the most popular square in the city. Although it lacks a bit of elegance and looks kind of grayish, it is still an important place.

National Monument – this monument commemorates those who have fallen in World War II and any subsequent wars. Each year on 4 May (the Remembrance Day) the national ceremony is held at the monument on Dam Square. The monument was built in 1956.

9 straatjes, or the 9 streets, is a famous shopping area in Amsterdam with cute little boutiques and quirky local shops. This neighborhood is unbearably charming, but be warned, you won’t be able to stop shopping!

Begijnhof is one of Amsterdam’s most famous landmarks – a small oasis of green in the busy city centre. It’s a lovely inner courtyard encircled by the houses of the Beguines – a sisterhood established in the Middle Ages for women who didn’t want to take vows but still wanted to live independently.

Note: When you are visiting the Begijnhof, please, keep silence and observe the rules. You can find them at the entry.

De Krijtberg is an active Roman Catholic Church built at the end of the 19th century.

Munttoren, or the Mint Tower, belonged once to the city’s defensive walls. In the 17th century it was used as a mint, hence the name. It has a lovely carillon that plays each 15 minutes.

Staalmeestersbrug is a draw bridge on Groenburgwal from which you will have a lovely view of the Church Tower of Zuiderkerk.

Rembrandtplein, or Rembrandt Square, is mostly popular with the numerous clubs and restaurants and the buzzing nightlife. However. Rembrandt Square is equally worth visiting during the day. Having a drink there and watching the resourceful ways in which people are taking pictures with the sculptures from the Night Watch is super entertaining.

Nightwatch 3D – this amazing sculpture, representing the most famous painting by the Dutch artist Rembrandt, has traveled the world before returning to Rembrandt Square for the second time in 2012 and is hopefully staying there forever.

7 Bridges Area – this is the most idyllic and postcard-like area in Amsterdam. Along the Reguliersgracht there are 7 bridges, hence the name.

Tip: If you want to take yourself one of those iconic Amsterdam pictures with the canals, the bridges and the typical canal house gables – this is the area to be. Just don’t forget your camera!

15 Bridges View Bridge (brug van 15 bruggen) – they call it like this, because you can actually see 15 bridges from this bridge, including the one you are standing on.

Jordaan Neighbourhood is mostly famous for its restaurants, brown cafes and boutique shops, but its hidden courtyards are the real treasure. There are 19 inner courtyards in Jordaan. Can you find them all?

Noorderkerk, or the Northern Church, is one of the first churches built in Amsterdam after the Reformation. What’s so special about this church is that it was the first church that has a floor plan in the form of a cross.

Anne Frank House – this is one of the most famous places in Amsterdam and a must-see for every tourist. It tells the story of Anne Frank and the diary she wrote while hiding in the secret annex in the house during WWII.

Westerkerk or the Western Church has the highest church tower in Amsterdam (87 m/286 ft).

Cafe Chris is the oldest cafe in this lovely neighborhood. It opened in 1624 as a beer house. You can’t visit Jordaan and not stop there for a drink.

Leidseplein is a busy square with numerous cafes. The beautiful building of the Stadsschouwburg (City Theatre) is at one corner of the square. Leidseplein is also the place to be for some night entertainment.

Rijksmuseum is another masterpiece of the famous Dutch architect Pierre Cuypers. It was built in 1885 and beautifully restored in 2013 to its previous glory. Rijksmuseum is the biggest museum in the Netherlands and a true bucket-list item for every visitor of the city.

Fun fact: The famous sign of I amsterdam that was drawing numerous tourists to the Museumplein has been removed in 2018.

Amsterdam is really a walkable city. Driving a car through the city is not a pleasure and you will need public transport only if you need to commute quickly from one place to the other. So the best way to discover the Dutch capital is to wander the streets along the canals and to enjoy the special character of the city.

These 4 walking routes of Amsterdam will be your best companion when visiting the city.