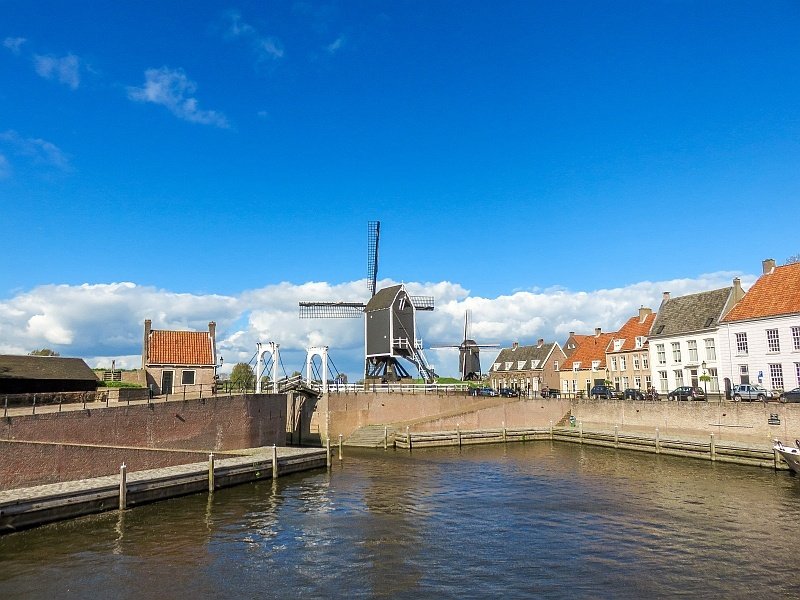 Heusden is a tiny walled town located on the banks of the River Meuse (Maas) in the Province of North Brabant. Seen from above, the town has the shape of a star. Heusden is the perfect destination for a day trip from Amsterdam, or other major cities in the Netherlands (Den Bosch, Utrecht, Eindhoven, Breda). Discover in this post what are the best things to see and do in Heusden so that you spend the perfect day out.

Heusden is a popular weekend trip destination for the locals, but for the international tourist it still remains off-the-beaten path. In the 1970s the whole town has been completely reconstructed, but unlike an open-air museum, which serves only as a tourist attraction, Heusden is a place where people actually live and work.

If you are planning to travel extensively in the area, you might be interested into these posts:

How to get to Heusden (Netherlands)

The best way to get to Heusden from Amsterdam or anywhere in the Netherlands, is by car. Just outside the town walls there are three parking places where you can park your car for free. Within the town walls the service is paid and quite restricted. The streets are tiny and the places are limited. So when coming to Heusden by car, please, park outside as the town is too small.

These are the 3 parking places outside the town walls:

With public transportation it takes less than 2 hours to go to Heusden from Amsterdam. First take the train from the central train station in Amsterdam to Den Bosch (‘s-Hertogenbosch) (about an hour) and then bus 135 to Wijk en Aalburg (about 20 min). The bus station in Den Bosch is next to the train station. You can plan your trip to Heusden by clicking on the Plan my journey button bellow.

Things to do in Heusden

Despite the small size, Heusden is absolutely adorable. Just stroll around and get lost. Well, you can’t really get lost as you would always reach the town walls in less than 15 minutes, no matter where you are.

1. Stroll along the fortifications

Heusden was one of the first walled towns in the Netherlands. The building of the fortifications began in 1579 and was accomplished in 1597. However, by the 19th century nothing was left from these once glorious fortifications. Today, the defence works are completely restored according to an old map from 1649.

The fortifications are a great place for a walk. They represent a complex structure of water, dikes, towers and ramparts. You can make a complete circle around the town walking on the elevated fortifications. You will have some beautiful views on the surrounding scenery and the town itself.

2. Check out the town hall

The town hall of Heusden, built in 1461, was once one of the most beautiful town hall buildings in the Netherlands. However, it was completely destroyed by the explosions on the early morning of 5th November 1944, just at the end of WWII. After the war it was rebuilt but not to its previous state. The new building was opened in 1956.

Today there is a visitors centre, which hosts various exhibitions. Here you can see models of the old town hall and the whole town including the fortifications.

In the Middle Ages there were four town gates that would let people in and out of the town walls. Today, there are two completely reconstructed gates: the Ferry Gate (de Veerpoort) and the Wijkse Gate (de Wijkse poort) and the remains of a third one – the Herptse Gate (de Herptse poort).

Today, there is almost nothing left from this once very important castle. It was built in the 12th century and was one of the biggest castles in Western Europe of its time. On 24 July 1680 a lightning hit the donjon, where the munitions were stored, and the castle, together with the surrounding buildings and houses, was blown in the air. The only thing that survived after the explosion were the walls of a rectangular tower. The castle has never been completely restored afterwards.

5. Check out the Fish Market (Vismarkt)

The Fish Market (Vismarkt) is the town’s square. It is surrounded by cafes, restaurants and art galleries, and is a nice place just to hang out. After walking around the town, you can stop for a drink at one of the many cafés at the square. If you want to drink your beer enjoying the yachts and boats coming and going at the marina, take a place at the Havenzicht café.

The Fish Market is the place where locals love to spend their Saturday afternoons. Heusden is also a preferred stop for bikers and motor bikers alike. On Thursdays, the local farmer’s market takes place at the square, where you can buy local biologically grown produce.

Have you already tried Dutch-style pancakes? The perfect marriage between a pizza and a crepe… Dutch pancakes come both with sweet and savoury toppings and are eaten mostly for lunch or dinner. The best place to try Dutch pancakes in Heusden is at the Pannekoekenbakker on Vismarkt.

7. Spot the cannonball on the wall

A local attraction at the square is the house with a cannonball in the wall – a proof of the turbulent past of this fortified town. Can you spot it? I’ll help you. Look to the right of the top window, near the bottom of the reinforcing bar. The house was built in 1620 and today it functions as a restaurant and a hotel: In den Verdwaalde Koogel (At the Lost Cannonball).

8. Soak up the view from the Visbank

The Visbank is the place where fish was once sold. Heusden received its rights to trade with fish in 1357. The Visbank with its 12 Dorian columns is a popular place for taking wedding pictures or just any type of pictures. Through an arched opening, there is a beautifully framed view to the small harbour, the bridge and one of the windmills. Don’t miss to take a picture there! It’s a postcard-worthy spot.

There are 3 windmills in Heusden along the dike but they are not original. They were built in the 1970s. This doesn’t really matter, as they complement the skyline of Heusden and make it look iconic and very Dutch-like.

Wander the cobbled streets and explore the little boutiques and shops on and around Vismarkt and Botermarkt. Make sure to pop in the chandlery on Nieuwstraat 10. You can see how candles are made in the traditional way with dipping and there’s also a shop, where you can buy the handmade candles.

11. Treat yourself to an ice cream

When you have enough of walking around, stop by at ‘t IJshuys on Botermarkt 21 and treat yourself to a yammie homemade ice cream. In the summer they offer like 50 different tastes!

To learn about the history of Heusden, visit the local museum housed in the former rectory, built in1592, which later became residence of the governor of Heusden. Het Gouverneurshuis (the Governor’s House) is one of the most beautiful buildings in the town. Visiting the museum is free of charge.

There are some really good restaurants and cafes in Heusden:

For the art lovers Heusden has a lot to offer. There are many art galleries exhibiting contemporary local artists. It is a pure delight to take a tour around the galleries of Heusden. History and modernity at one place. Modern art is not only in the galleries of Heusden but also on the streets, so watch out and you will be surprised by strange creatures.

15. Take a boat trip in Heusden

If you are done with the sightseeing on the ground, you can take a boat trip on the River Meuse (Maas). You can either hire a private boat or you can do one of the organized boat trips. For more information check at the Tourist Office.

There’s also a big billboard at the harbour behind the canons, where you can check the departures schedule of the cruises.

Where to stay in Heusden

Heusden is a really small place, so the number of places to stay within the town walls is quite limited. 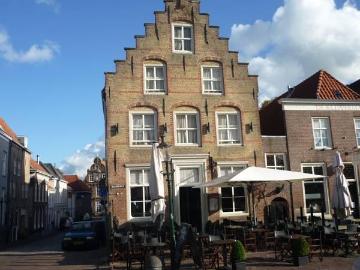 For the first time the name of the settlement is mentioned in 722, but it is only in the 12th century when the town began to form itself around the Castle of Heusden. The first defensive walls around the town were built in the 14th century. At the end of the 16th century the fortifications were reinforced and modernized. Through the centuries the town grew and the defensive walls were expanded further.

Just at the end of the WWII the town suffered one of the biggest tragedies in its history. On the night of 4th to 5th November 1944 there was announced an artillery attack. 170 civilians gathered in the cellars of the town hall to seek shelter. In the early morning of 5th November, the Germans detonated the tower of the town hall which collapsed on the building itself, killing 134 people, a 10% of the town’s population then. Few hours later the town was liberated by a Scottish Division. The detonation of the town hall was investigated as a war crime as the explosives were put in such a way that the tower would collapse onto the building and not on the street, for example. However, those who executed and led this operation were never charged. There are still stories that go around about those tragic events.

Daniela has been living and travelling in the Netherlands since 2009. She has actually been to all the places she writes about. A linguist by education and a writer by profession, Daniela is on a mission to help you plan the perfect trip to her home country - the Netherlands.
We use cookies to ensure that we give you the best experience on our website. If you continue to use this site we will assume that you are happy with it.OkPrivacy policy