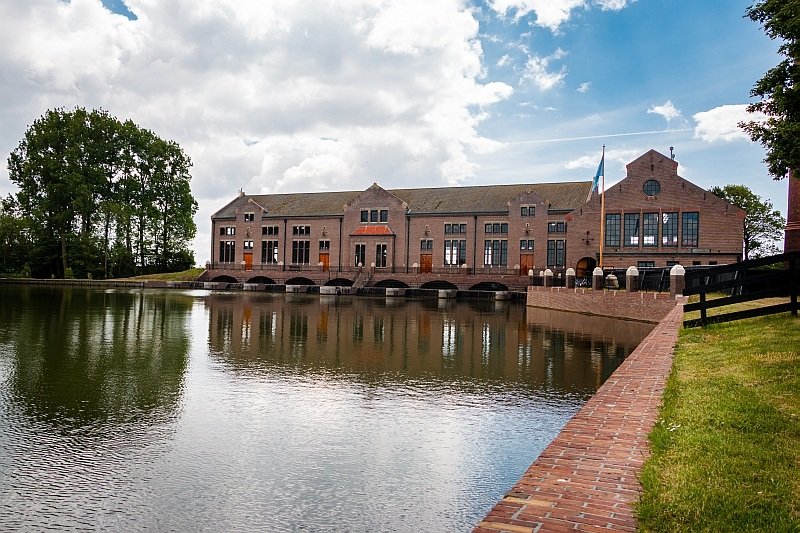 Since time immemorial, the Netherlands has been linked to water management. Much of the country lies at or below sea level, and keeping Dutch farms, towns and cities dry is critically important. The locals have been digging canals, dikes, and reservoirs since the 14th century in an attempt to control the waters, and even that most iconic of Dutch buildings – the windmill – was just another part of that process. One of the biggest technological leaps in water management came in the early 20th century, with the opening of the D.F Wouda Steam Pumping Station (known in Dutch as Ir. D.F. Woudagemaal). But what exactly is it? What’s the history behind it? And why is it on the UNESCO World Heritage List? Read on, to find out!

What is the D.F. Wouda Steam Pumping Station?

The D.F. Wouda Steam Pumping Station is the largest steam-powered water pumping station ever built. Located near the town of Lemmer, about 100 kilometres north-east of Amsterdam, the Station was built to pump water from the entire province of Friesland back out into the Zuider Zee (now the IJsselmeer). With an extraordinary pumping capacity of four million litres per minute (that’s about two Olympic-sized swimming pools every minute!), the Wouda Steam Pumping Station is the world’s largest steam pumping station. It was considered such an important and ground-breaking milestone in Dutch water management, Queen Wilhemina herself attended the opening ceremony.

Large scale water management projects in the Netherlands have been quite common throughout history, as can be seen in other UNESCO World Heritage Sites like the windmills at Kinderdijk and Beemster Polder. Steam powered water pumps first appeared around 1825, and offered large improvements over more traditional methods. By the end of the 19th century, over 700 steam powered water pumping stations had been built.

In 1913, authorities decided to build a massive new steam pumping station to solve persistent flooding problems in Friesland, and so the D.F. Wouda Steam Pumping Station was born. Overall responsibility for the design and implementation was given to the engineer Dirk Frederik Wouda, who at the time was Chief Engineer of Provincial Public Works, and whose name still adorns the station. Technical details were managed by Johan Christiaan Dijxhoorn from the University of Delft.

After opening in 1920, the Wouda Pumping Station was powered entirely by coal, brought in by boat and carried manually from the docks by workers with wheelbarrows. During World War II, when coal was in short supply, peat was used as fuel instead of coal! By the 1960s, damming of the nearby Lauwers Sea (Lauwerszee) closed off one of the main causes of flooding in Friesland, while the development of new electric pumping stations made a large pumping station like Wouda much less effective, so it was gradually phased out.

The station was converted from coal to more efficient diesel fuel in the late 1960s, and placed into a standby mode. Once or twice a year, usually during heavy storms, the D.F. Wouda Pumping Station is fired up again, extracting colossal amounts of water from the surrounding farmland, and sending it back to the sea. It was added to the UNESCO World Heritage List in 1998, as one of the high points of Dutch water management.

The engineering inside the pumping station is absolutely incredible. Four steam engines occupy the large machine hall, with colossal boilers and dozens of pipes, hoses, wheels, and valves. Each of the engines generates 500 horsepower (373 kilowatts). Attached to each of these engines is a pair of double-suction, centrifugal pumps, rotating at around 110 rpm and capable of pumping 500 cubic metres per minute.

To fully bring the Pumping Station online, all four steam boilers and eight water pumps need to be activated individually. The entire process takes more than six hours, and requires a team of at least 11 people to manage. It’s a lot of effort compared with modern electric pumping stations that activate more or less instantly, and only require flipping a switch!

Architecture of the Wouda Pumping Station

Aside from its impressive technology, the Wouda Pumping Station is also on the World Heritage List for its beautiful architecture – somewhat surprising for an industrial building! The complex consists of the machine hall, boiler house, and a tall smokestack, all of which were designed by lead architect D.F. Wouda in the Rationalism style, a forerunner of the Amsterdam School. His design focuses on simplistic elegance with sharp and clean lines, subtle facades, and symmetrical elements too.

The station is largely made of brown brick, natural stone, oak, and steel trusses, and it sits very naturally among the flat green landscape of Friesland. The cavernous machine hall (home to the giant water pumps) is long and narrow, with a high gabled roof that deliberately invokes the feeling of a cathedral, almost like a shrine to mankind’s dominance over the water. Interestingly, the 60 metre high smokestack attached to the station is one of the highest structures for miles around, and over the years it’s been an important navigational beacon for sailors on the adjacent IJsselmeer.

How to visit Woudagemaal from Amsterdam

The best way to visit the Wouda Pumping Station from Amsterdam is by an organized tour or by car, as by public transportation it’s quite a journey.

Here’s a selection of day tours from Amsterdam, that besides the pumping station, include 4 other UENSCO World Heritage Sites which are not easily accessible from Amsterdam:

If you travel by car in the Netherlands, it takes about 1 hour and 15 minutes (105 km) from Amsterdam to the pumping station.

If you rely only on public transportation you can still visit the Woudagemaal from Amsterdam, but it will be more like a day trip. The journey takes at least 2 hours in each direction. Depending on the connections, you will need to change a few trains/buses until you reach Lemmer.

Click on the button below to plan your journey, wherever you are in the Netherlands:

At the Wouda Pumping Station there’s a visitor centre where you can learn about this UNESCO site. There’s also an interactive exhibition, a 3-D cinema and a panorama hall, where you can get some refreshments and admire the beautiful landscape.

Overall, the D.F. Wouda Steam Pumping Station is a fascinating UNESCO World Heritage Site. It represents the literal high-water mark in the Netherlands’ long battle against the water, and stands as a proud expression of early modern technology. The station’s near-perfect preservation also makes it very easy to see how modern solutions were used to combat age-old problems.